The depicted game board (Fig.1) was discovered during archaeological excavations at Ballinderry in the irish shire West Meath. It is assumed that this board was used to play the Halatafl-game, which ist mentioned in some Old Norse sagas. The both head-shaped handholds give hint that Halatafl was a two player game. The 7x7 holes in the board were obviously used to slot in gaming pieces. The Old Norse word Halatafl is a compound consisting of "Hala", wich means heel (compare: Norwegian hæl), and "Tafl", that can be translated as (game)-board. The so called heel, hala, respectively is a small slot at the bottom of each gaming piece to slot in the figures in the holes of the Halatafl-board. The conor squares and the square in the center are marked by carvings. 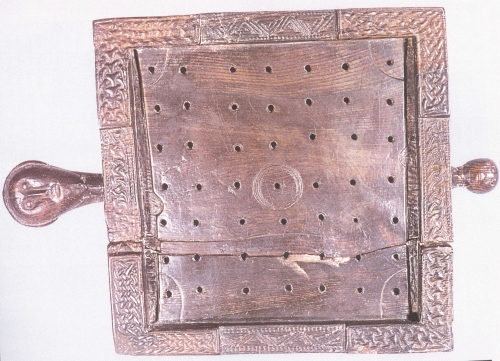 
A compareable depiction can be seen on the Ockelbo Runestone (Fig.2). The stone shows two men balancing a boardgame on their knees. The depictet gameboard has similar markings in the center and in the corners like the Ballindery board. From this it can be concluded that these special fields remained empty at the beginning of the game. In 1904 the rune stone from Ockelbo, Sweden, was unfortunately destroyed in a fire. 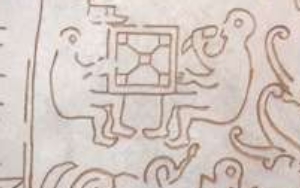 The usually wooden gaming board for Halatafl counts 7x7 fields with holes drilled in the center of each playing square to contain one figure. Each of two players, black and white, has 22 gaming pieces. At the beginning of the game the figures are placed as shown in Figure 3. The four corner squares and the field in the center remain empty. 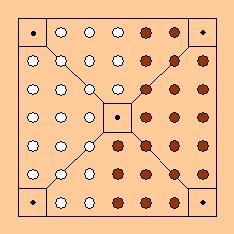 Usually white begins the game and moves the first gaming piece on the vacant field in the middle of the board.
In consequence black captures this gaming piece by jumping over it. And so on...

The game continues until less than 5 gaming pieces of one player remain on the board. A gaming piece can make an intermediate stop on one of the corner squares, when jumping and captureing one of the opponents gaming pieces. But it is not allowed to stay there and must be (re-)moved at the latest in the next turn from there.
Contents